They should be taking their first flights sometime this week.  Unfortunately, due to the construction on the Lift Bridge, the Skyway and with the pier and parking fenced off.  Bill and I have advised the Canadian Peregrine Foundation that we will not be doing the watch this year.  We feel it is better to not know than to see a bird go down and not be able to do anything about it.  That would be heartbreaking for me.
Posted by Susan L. McCreadie at 18:05 No comments:

Someone (mostly Cirrus) never leaves the corner of the nest box and Mackenzie spends quite a bit of time inside the box.  Hmm, is he checking on eggs or is he working on the scrape?  However, they are definitely not finished producing eggs as they are still mating and hard incubation has not begun.

When Bill arrived at the bridge this morning around 10:30 AM he found an adult in the Hamilton Hydro Tower.  It was alarm calling and made several rushed trips towards the Skyway Bridge.  We have no idea what was so upsetting as it was out of sight.  When the danger had passed, the adult came back to the corner of the nest box and it turned out to be Cirrus.  When she landed on the box, Mackenzie exited the box where he had been the whole time.  He flew around the bridge and came back and copulated with her. 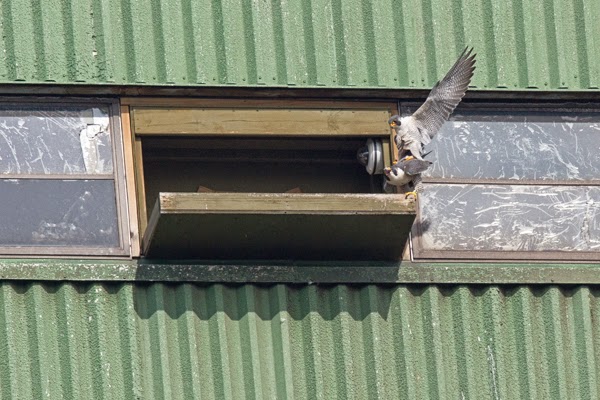 While we watched this afternoon, we heard lots of calling and saw Mackenzie deliver a meal to the roof of the Burlington Tower.  He prepared it a little as we saw lots of black feathers flying.  He then delivered it to Cirrus in the next box with great vocals.  Cirrus didn't appear too interested so he removed it and took it to one of the picnic tables.  He then took off under the Skyway and appeared to stash it up on to one of the Skyway light standards.  He returned to the Hamilton Hydro Tower where he watched Cirrus.  A short time later, he circled the bridge and copulated with Cirrus again. 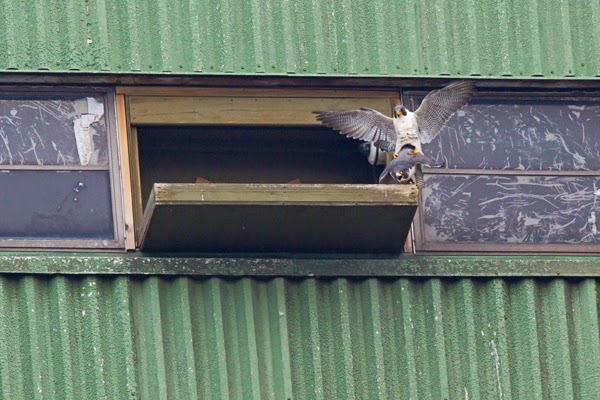 Posted by Susan L. McCreadie at 16:36 No comments:


Finally, above zero degrees for 2 days in row.  The canal is no longer frozen over.  Just the odd ice flow is making its way out to the lake.  The water fowl are once again busy diving for food and the Trumpeter Swans are visiting daily so they can drink and bath.  YAH!!!
Cirrus and Mackenzie are very busy in and around the nest box.  Cirrus is not straying too far.  Mackenzie is in the box working on the scrape while Cirrus is standing watch from the corner of the nest box.  There is a fair bit of calling going on between the two and lots of mating taking place.  When will be have our first egg???
We were able to confirm Cirrus' band number but have not been able to confirm that Mackenzie is the male.  We are working on it.  Cirrus is now 9 years old being born in Dayton, Ohio in 2006 and Mackenzie was born in Etobicoke, Ontario in 2009 making him 6 years old this year.
Keeping our fingers crossed for a successful nesting this year.

Despite the cold windy day, Bill took himself off to the Lift Bridge to see what he could see.  Both Cirrus and Mackenzie were very visible. We have not been able to positively identify them as yet this year but we are working on it.

The mating ritual has begun.  Mackenzie seemed to be working on the scrape inside the nest box while Cirrus watched from the corner. I guess he is trying to prove to her that he will be a good provider again.  You can see just the tip of his head and yellow beak in this photo. 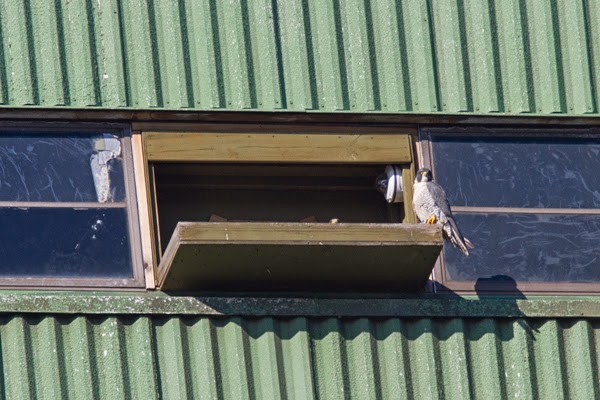 There appeared to be something in the area that was upsetting them and both birds took off and climbed until they were just specks in the sky, kakking as they went.  Nothing could be seen with the naked eye.  Several times they took off  towards Burlington in hot pursuit of something that couldn't be seen.


Stay tuned, I'm sure we will have lots to report in the days to come.

Posted by Susan L. McCreadie at 10:35 No comments:

Well, I would have to say that the 2014 Fledge Watch at the Burlington Lift Bridge is over.  We have not seen Ghent since June 23.  Here's hoping that he is well on his way to independence.  The photos below are the final ones that Bill got of him on June 23.  As this Fledge Watch has taken up so much of our time, we now wonder, "What will be do for the remainder of the summer?" 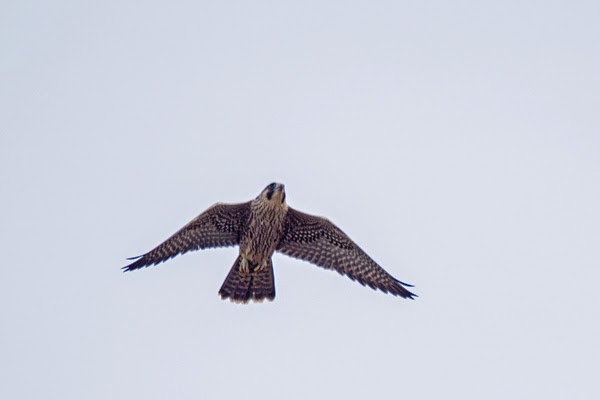 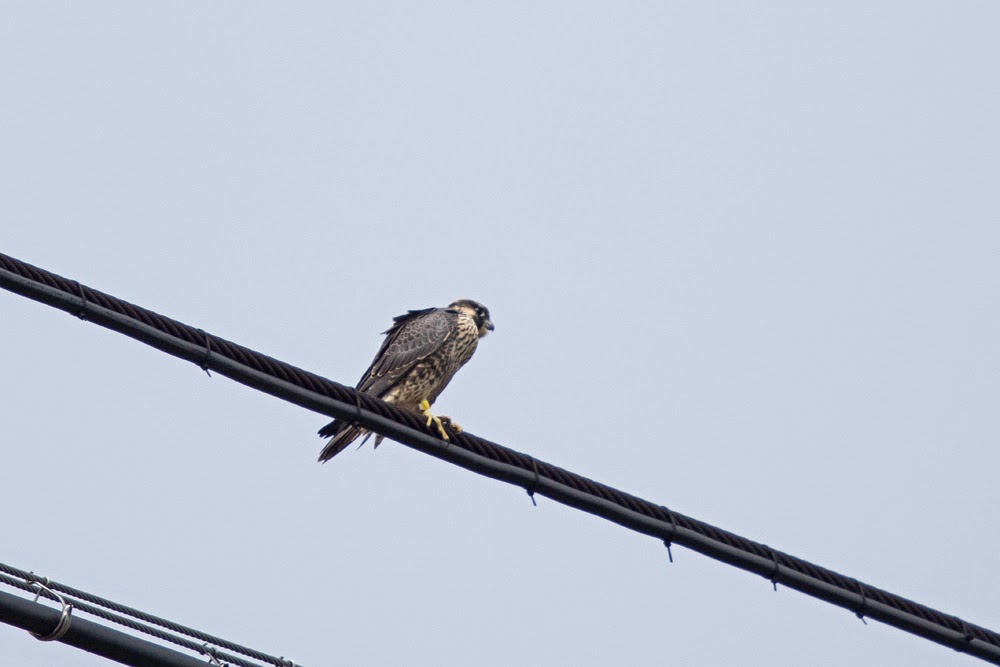 Fly high and fly free little one.  Hopefully we will hear about you nesting in your own territory some day.

Hope those of you who have followed along as we have watched from mating, to incubating, to growing, to banding and to fledging have enjoyed the journey.
Posted by Susan L. McCreadie at 10:06 No comments:

As some of you who have been following my Blog are new to Peregrine Falcons, I thought you might find it interesting to see the growth chart of a baby Peregrine.  As we watch these amazing creatures from day one to fledge, it is no wonder that we care so much. 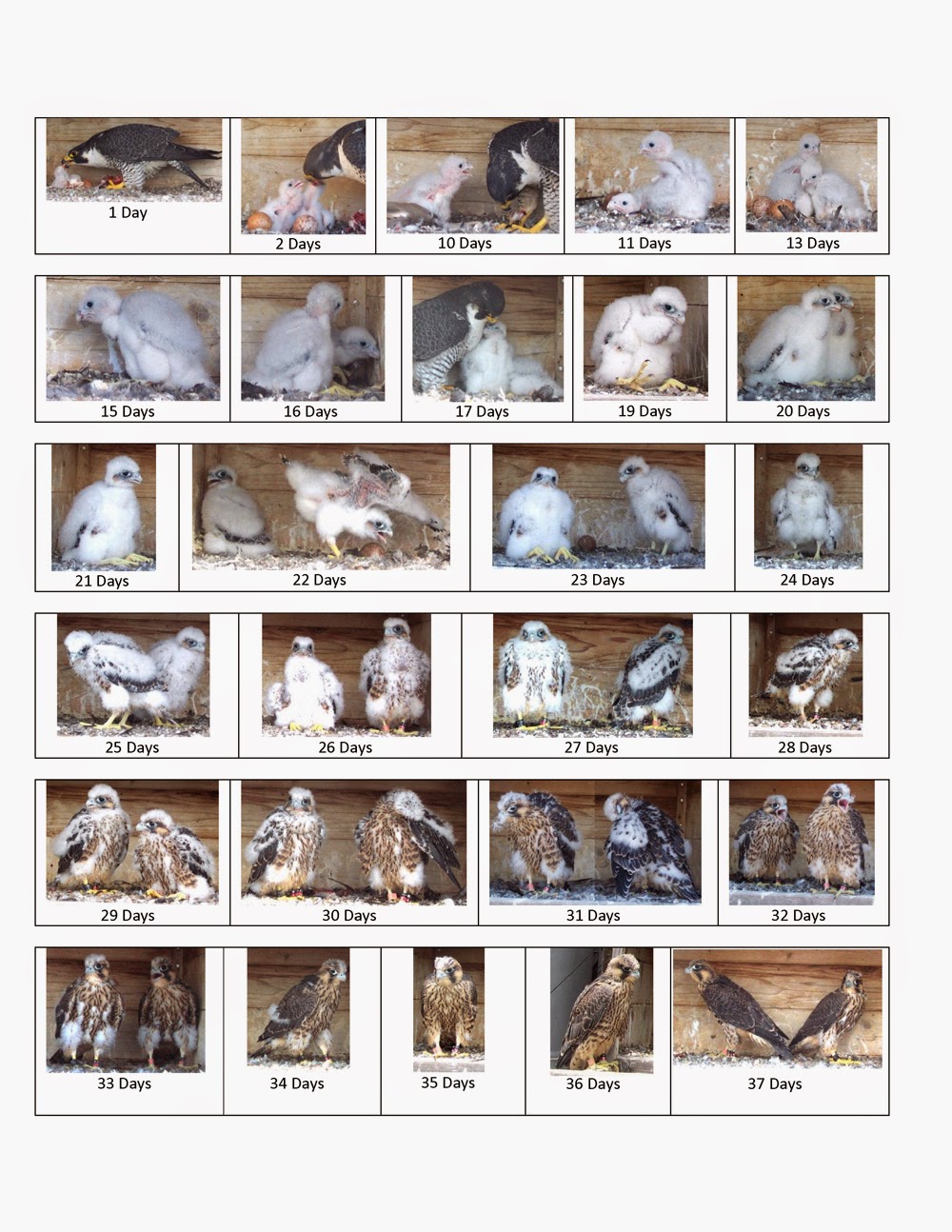 Posted by Susan L. McCreadie at 06:35 No comments:

On Sunday afternoon, Bill and I attended the Bench Dedication for Big Frank Butson.  Frank founded the Hawk Watch at Rosetta McClain Gardens in the fall of 2004. He arrived at the park daily before sun up and left at sun down.  He made many friends and introduced many to the bird watching habit. It has been a year since he passed away and about 30 or so Hawk Watchers and friends joined together for this dedication.  It was amazing to see how many folk he had touched during his years at this Hawk Watch.

In addition to the Raptor Watch, Butson was also a dedicated volunteer with the Canadian Peregrine Foundation. Bill and I had spent many hours with Frank while he assisted us at the Burlington Lift Bridge Falcon Watches in it's early days.  Frank was a fixture for weeks at a time at the various Falcon Fledge Watches across the GTA area.

RIP big guy.  You will be missed by many. 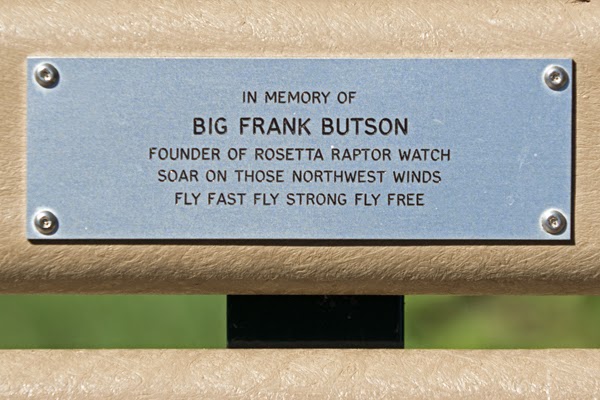 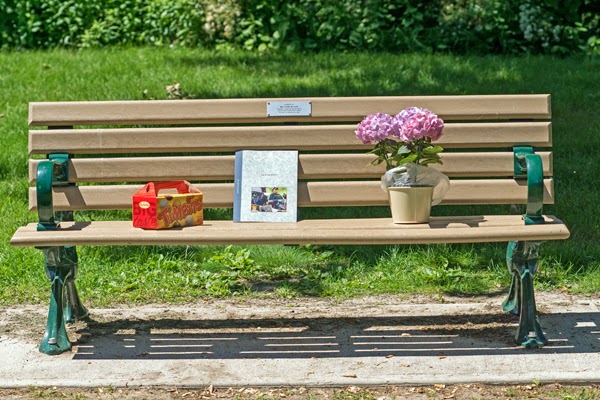 Posted by Susan L. McCreadie at 06:27 No comments:

Susan L. McCreadie
Burlington, Ontario, Canada
Peregrine Falcons have been nesting on the Burlington Lift Bridge since 2004. They were unsuccessful in raising young until 2008. In 2007 the Canadian Peregrine Foundation installed a nest box and once the adults started to use it, young ones started to hatch. Since 2008, my husband Bill and I have been doing the Peregrine Falcon Watch as volunteers with the Canadian Peregrine Foundation. We have seen 26 young hatch and fledge. We have successfully rescued and released 10, who were not too lucky in their first flights. So, we feel our efforts have not been in vain. These birds are amazing to watch and every year we learn something new. This blog will follow our efforts as we look forward to a successful 2015 fledge.